View products
Like a vast rectangle green lung sitting in the middle of a sprawling concrete jungle, Central Park is what breathes life into the famous city on the Eastern seaboard of the United States. Covering over 3.4km squared, it is a vast expanse and is not only the most visited park in New York state but the most visited park in the whole of the United States with 38 million visitors annually. Given this is the case, it is easy to understand why it is also the most filmed location in the world. And it is easy to see also what it is that pulls in the crowds; Central Park is home to a huge abundance of flora and fauna. Hundreds of birds of different kinds of species are spotted each year dotted amongst the many thousands of trees. Woods and carefully manicured lawns give way to watercourses and lakes, making for a hugely varied environment. Various glaciers over history have lent the expanse a variety of different rock forms which all come together to add to the park's diversity. 20 gates give easy access to the park, along with a large number of subway stations and bus routes that run alongside it, together with the multitude of transverse roads and scenic roads that run through it. What marks Central Park out then, is not only the abundance of nature but also its convenience and accessibility. It is a simple idea and design and executed to provide the greatest experience with the maximum ease. It is these qualities which we have made front and 'center' of our Central collection. Simple and easy designs help create a range that is hugely malleable to everyday environments and journeys.

This collection typifies everything that makes RIVACASE so special. In many ways, it represents the backbone of our mission to provide simple and affordable options for those that just want to get on in life, without hassle, and to make the most efficient use of their day. As such the Central range is suitable for anyone, from student to teacher, from intern to boss. The easy designs make for a bag that matches any kind of clothing and every single aspect of the range has been constructed to ensure that it is as durable, adaptable, and functional as possible.

This Central range comes with its own durable dot patterned fabric with a gleaming effect that gives the whole collection an air of deep sophistication and maturity. Gone are the days when we think of our electronic items as being utilitarian devices solely created for their functionality. The beautiful design has been a part of their making ever since Steve Jobs came up with the first Apple designs. And the accessories that house these items should be no different. You want your bag to be able to make an impression in the boardroom and not look out of place in the setting of your home. That is why this Central range incorporates this eye-catching design.
+ 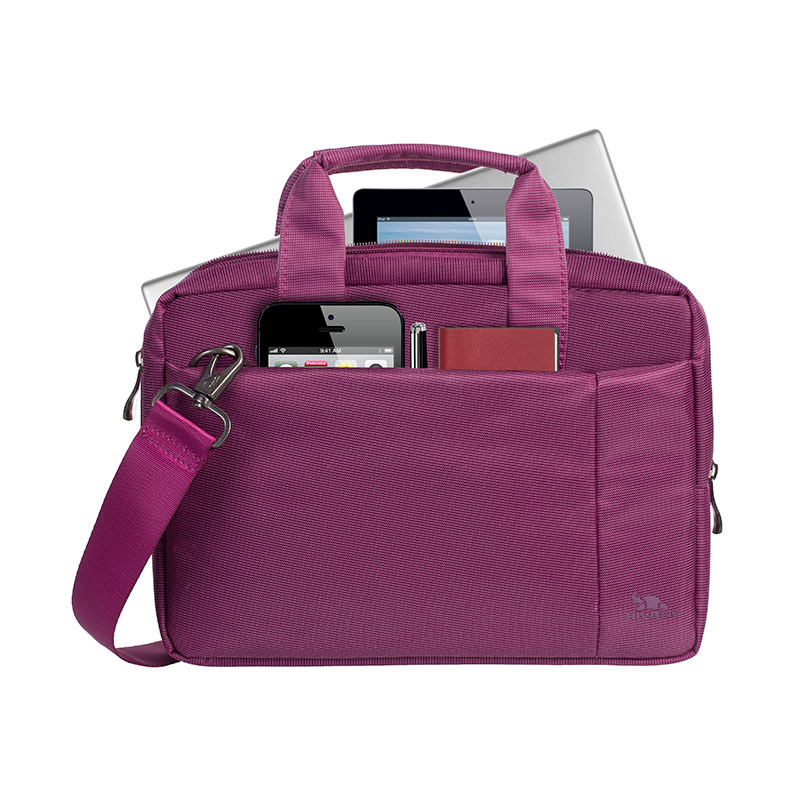 It is crucial when buying a new laptop bag that you strike the right balance between size and practicality. We can all remember those monstrosities from the 1980's with their inflexible and cumbersome design. But just as silly are the super-lightweight modern designs that are just as impractical and permit you to carry almost nothing with you - completely defeating the point of the bag in the first place. This laptop bag treads the fine line in this debate to create a bag that is compact but capacious and allows you to carry what you need with you without ever becoming a hindrance.

There is nothing worse than faulty pullers that let you down. It is almost always at the least helpful of times or places. When you are in the middle of the airport concourse and your bag zip fails, leaving your items strewn across the airport floor and seemingly no solution in sight. Not only does this Central bag circumvent this issue by providing you with extra sturdy metallic pullers that you can depend on but also they have been specially curved for the most ergonomic of reasons. It means that you can slip your thumb into the notch and pull your zip with ultra-ease, saving you time and stress.

It's the small things that make the difference in life. The best tailors know that the inner lining of a suit is just as important as how they cut the drape or the length of the sleeves. Similarly, it is the intricate details of a dress, the quality of the lace, the shine of the satin or the design or cut of the collar that makes the difference. When in the boardroom, we know that it is these subtle details that make the difference too and so that is why we have included a specially VA-printed interior lining so that even if no one else knows it's there, you know.
+ 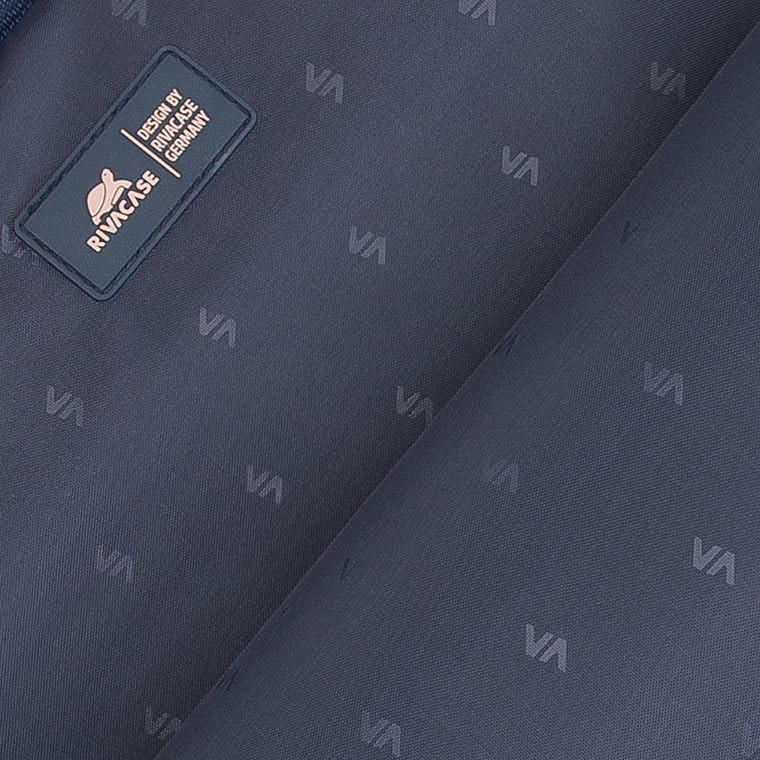 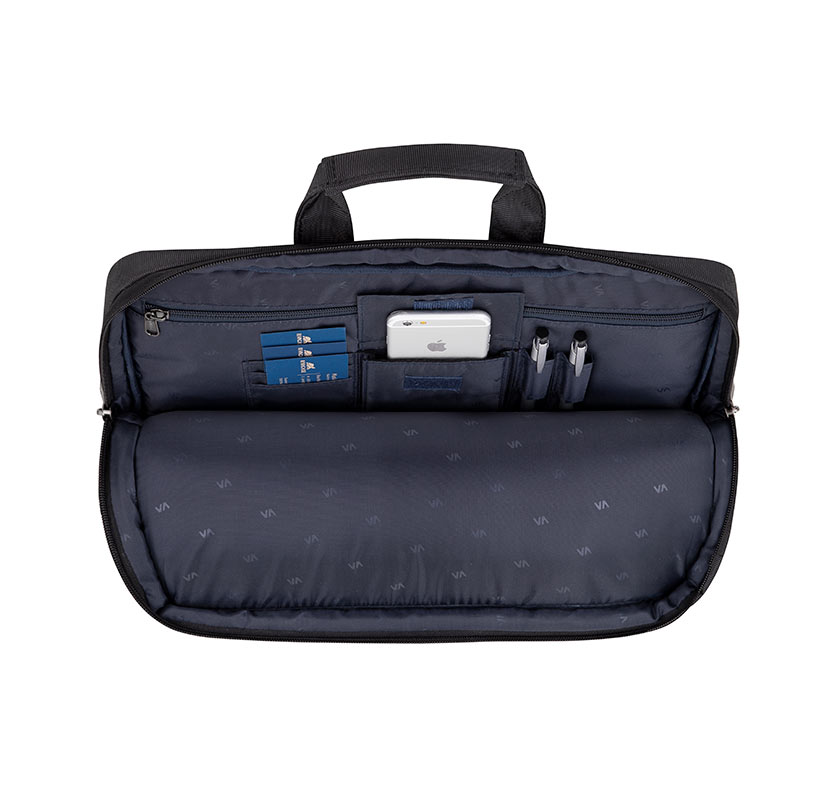 A clean body means a clean mind. A tidy desk gives you rest. Similarly, an organized bag is what keeps you in a constant state of readiness. This bag comes with its own organizer panel for all your accessories - smartphone, pens, business cards, portable charger - you name it. This means that no matter what the day ahead might throw at you, you have everything stowed away in its right place and ready to be pulled out at a moment's notice. No longer are you left scrabbling around looking for this or that but instead, you are on your game, and ready for the challenge ahead.

VIEW PRODUCT
This laptop bag is perfect for any laptop up to 13.3" in dimensions is made of high-density synthetic material to ensure better protection. Your electronic device these days is too important, contains too much crucial information, to get damaged. An external zippered pocket comes with an organiser panel for mobile phone, business cards and accessories turning a simple laptop bag into a portable desk. And an asymmetrical double zip-fastener provides easy access to a tablet. Everything has been designed with the safety of your items and the functionality of your experience in mind. 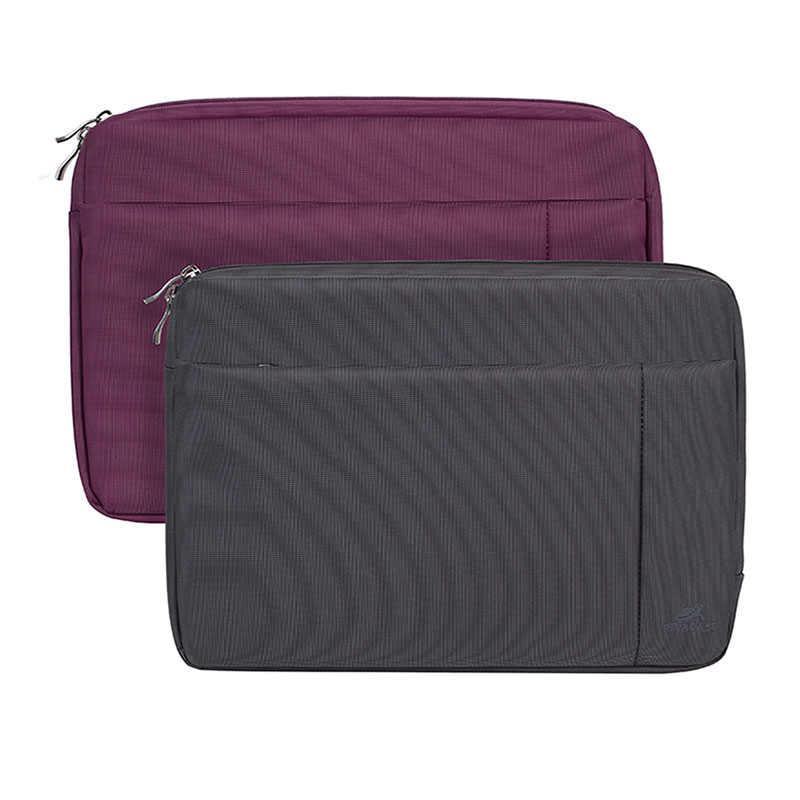 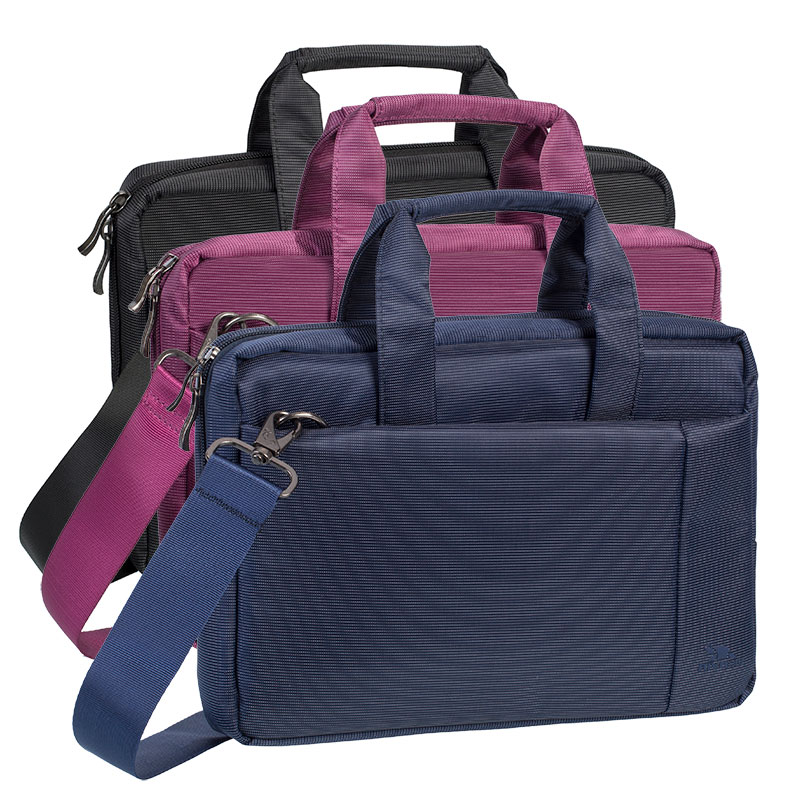 This stylish and slim bag is perfect for tablets up to 10.1“  in dimension or an iPad®. Made of high-density synthetic material with thickened sides it has been created with the protection of your device first and foremost in mind. A double zip fastener will permit you easy access to your device.  Two outer compartments will easily store all your necessary accessories. A front compartment with a pocket for laptop accessories and a smartphone is provided. Also, because you sometimes need that extra hand free, an adjustable shoulder strap and closing system with original steel hardware are provided so that you can sling the bag over your shoulder and continue on your way with ease.

VIEW PRODUCT
This Central laptop bag is the perfect solution for carrying Macbook Air, Pro 13.3" and ultrabooks. A padded laptop compartment provides extra protection for whichever device you need.  An external pocket for your devices or a Tablet is available to you should you need to quickly stow an item away. To help you maintain your focus, a front pocket with an organizer panel for documents, accessories and a smartphone is provided. And to help you maintain your efficiency, dual zipper pulls enable quick and easy access. And, as with all this range, comfortable padded handles and a removable, adjustable strap with an anti-slip shoulder pad create an easy user experience. 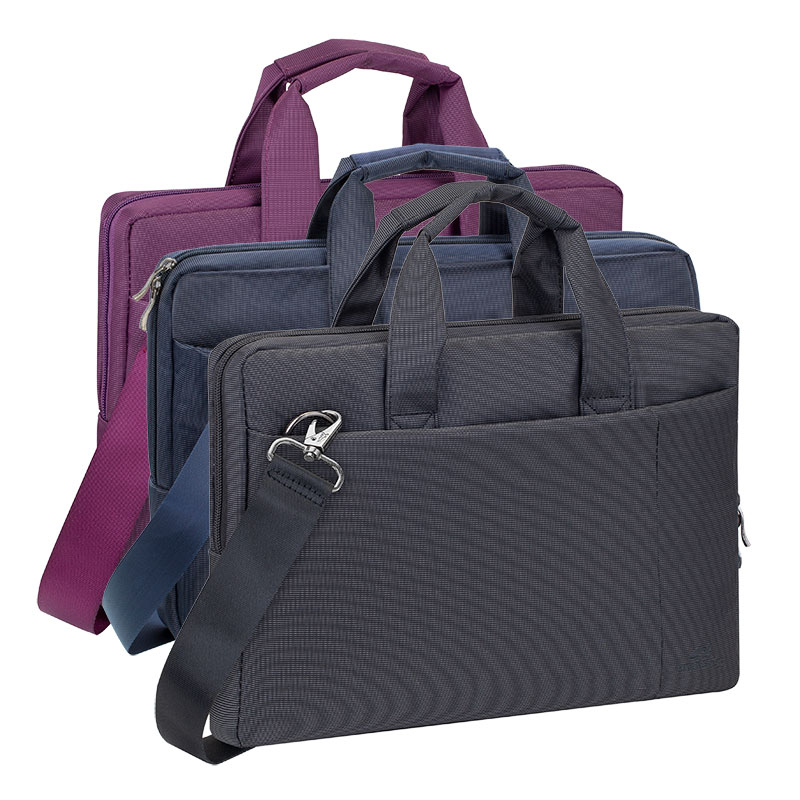 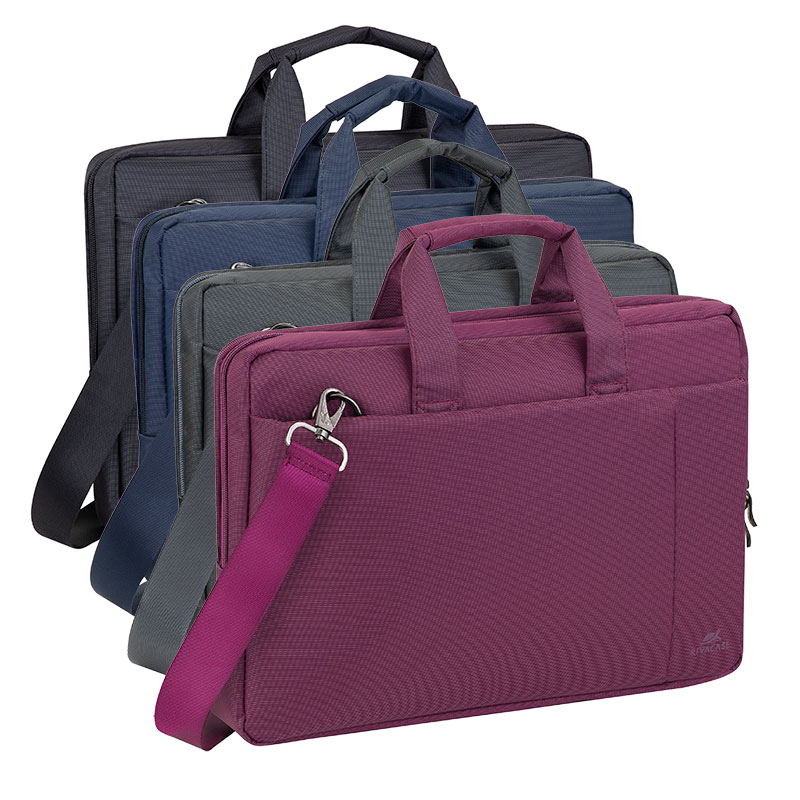 This laptop bag is the perfect option for laptops up to 15" in dimensions. With a padded laptop compartment providing extra protection and an external pocket for your devices or a Tablet also, this Central bag will keep you items both secure and also easily accessible.  To help you maintain your focus and efficiency respectively, a front pocket with an organizer panel is made available for documents, accessories and a smartphone, and dual zipper pulls for quick and easy access. Finally, for those who prefer the over the shoulder look, comfortable padded handles and a removable, adjustable strap with an anti-slip shoulder pad is provided.

A padded laptop compartment provides extra protection to any laptop up to 17.3" in dimension. This bag, one of the largest in the range also offers you an external pocket for your tablet or devices as well as comfortable padded handles should your bag end up on the heavier side. Similarly, a removable, adjustable strap with an anti-slip shoulder pad is provided in case you need to take the weight off your hands for your journey. This bag also includes a front pocket with organizer panel for your documents, accessories and a smartphone, so that no matter what the day holds, you will remain clear in mind and ready for the challenge it brings. 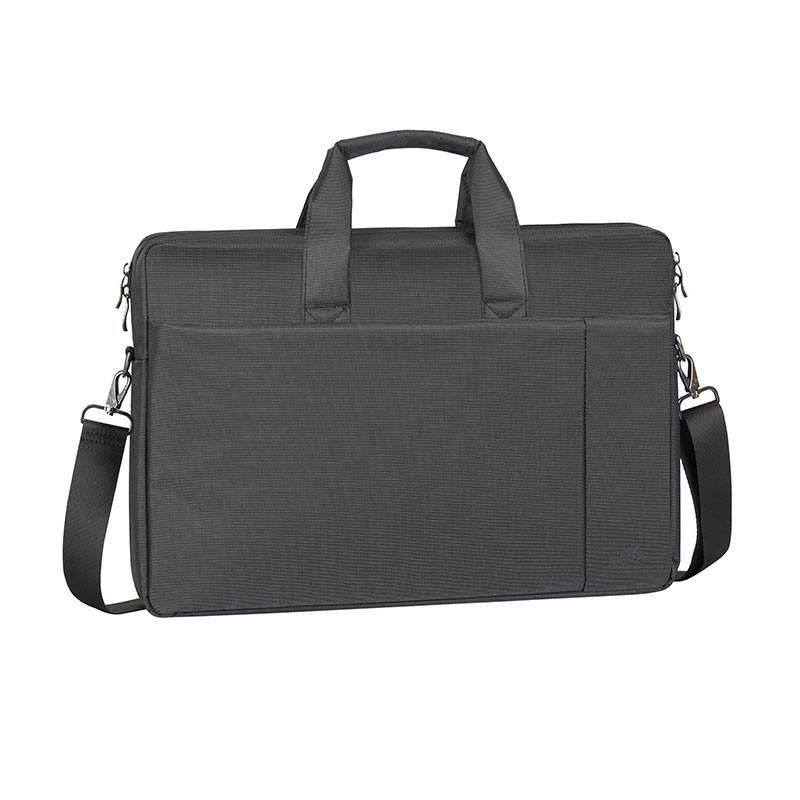 This large and hugely multifunctional bag is the perfect partner for those jet-setting professionals going on a business trip or travelling around the world. Made of durable polyester fabric it provides a padded compartment for any device up to 17.3" in dimension. The spacious storage compartment will easily accommodate everything that may be needed on your trip. A front zippered pocket with an internal organization system for business cards, pens, flash drives, smartphones and other accessories is provided. And in case you need to slip something away quickly, but with security, an additional external zippered pocket on the back for other personal belongings is available.

This bag is designed for carrying notebooks with screens up to 16" screen in dimension. It is incredibly versatile, and thanks to folding handles and loose shoulder straps the bag easily transforms into a backpack. So should you be going on a long journey and need to spread the weight, you can quickly slip it onto you back, and then,  when arriving for your meeting and needing that professional look, simply reverse it back into a laptop bag. And because these days your devices are just too crucial, too integral to your everyday life to take any chances with, the interior is made of a unique shock-absorbing material which protects your computer from possible damage. 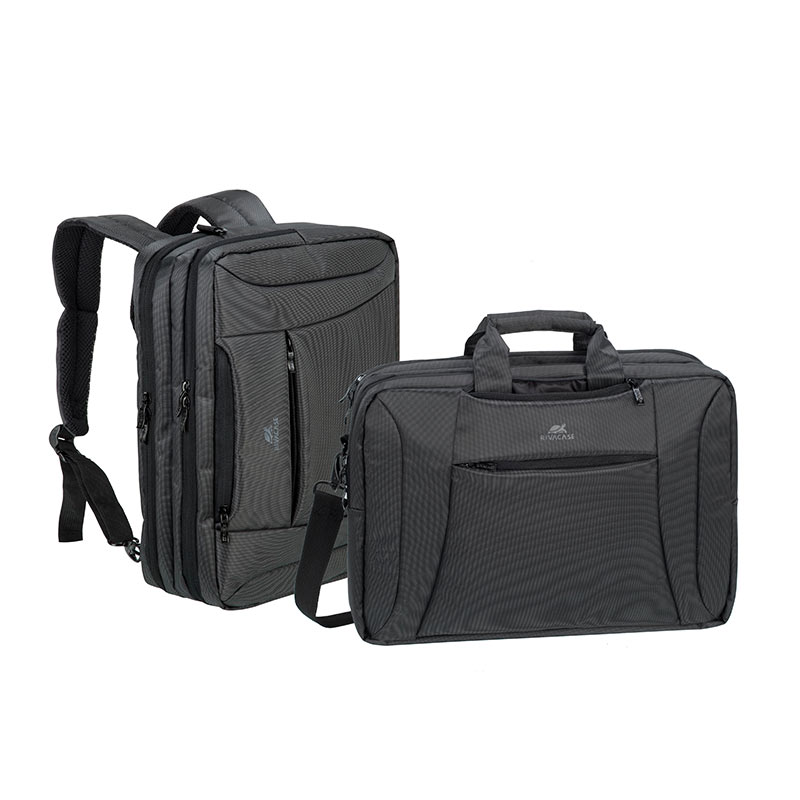 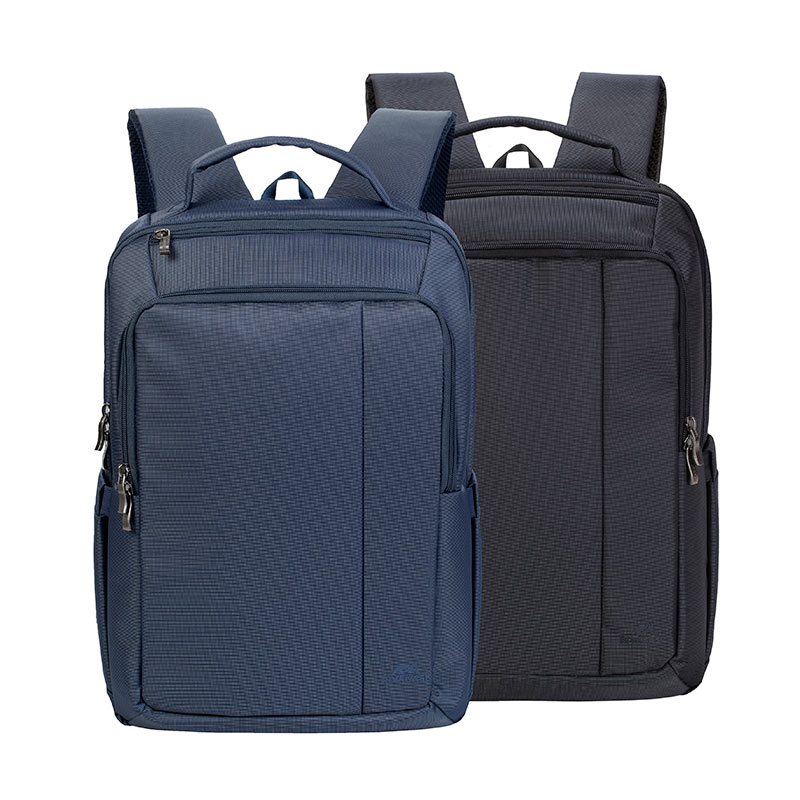 This backpack from our Central range is the perfect solution for those who need something for a short business trip as well as something to be taken on a longer journey. Manufactured from high-quality polyester it will protect your laptop from possible damage. The main vertical load compartment for your laptop has soft sides and a strap for a better hold. An additional inner compartment is available for a Tablet up to 10.1". A further capacious section for books and documents is provided as well as a top load zippered slot for small electronic devices. A luggage strap will securely attach the backpack to most rolling luggage. And the backpack has 2 side-pockets for bottles of water to keep you hydrated on your journey.